Two girls gone. One detective under pressure. And no time left. Shannon hustled to her car and dug into her black purse, searching for her car keys. He quickly put his hand over her mouth as she screamed and thrashed, slid the van door open, and dragged her inside. . . . She tried to scream through the duct tape pasted over her mouth . . . it was only the beginning. Mac McRyan, a fourth-generation cop, is faced with a brazen daytime kidnapping and a media storm surrounding the case. An abduction is just the beginning in a case of betrayal and revenge that will ultimately strike at the heart and soul of the St. Paul Police Department. From the searing streets of St. Paul to the murky waters of the St. Croix River, Deadly Stillwater is the riveting and gritty mystery you won’t be able to put down until its last gripping minute.

April Michelle Davis proofread book 3 of the McRyan Mystery Series. Proofreading is the final step in the publishing process before the book is printed. This is the final defense for grammatical and typographical errors to ensure the readers have an enjoyable experience.

On her way to work one summer morning, a beautiful young television anchorwoman vanishes without a trace. Precious little evidence remains: only her car and a few puzzling clues. Peer behind the scenes of this true crime story, and uncover the cold case file of Jodi Huisentruit, the Iowa anchorwoman who mysteriously disappeared before dawn that summer morning in 1995.

Somewhere, someone still harbors the truth about what really happened. An intriguing and compelling case from the heartland of America, the search for Jodi Huisentruit baffles authorities. Multiple scenarios and theories abound. Sixteen years later, the memories of Jodi–and her disappearance–remain to haunt an entire industry, her family and friends, and a loyal viewing audience.

Written by a former television anchorwoman with an inside look into the TV news business, Dead Air is an eerie and unforgettable mystery that still poses more questions than answers.

April Michelle Davis proofread this manuscript prior to it being published. She focuses on the details and consistency of each word and how the words interact within each sentence as it relates to the story being told. April Michelle ensures the text makes sense and is readable by the intended audience. As the proofreader for this manuscript, April Michelle‘s education and skills gave her the edge to take this manuscript to the last stage in the editing process, the publishing stage.

Confederate Gold is an action-packed comedy, taking a serious look at the American Civil War through the eyes of reenactors in the twenty-first century. This fun, funny novel is a raucous run, rampaging through Richmond, Virginia’s Civil War history. In June 2011, a 150 years after the beginning of the American Civil War, reenactors find long-lost Confederate gold and a madcap chase ensues. The reenactors, eager to donate the gold to preserve Civil War battlefields, are pursued by a diverse array of adversaries, all having designs of their own for the gold. The race is on across Richmond’s intriguing landscape of battlefields and historic sites as the characters embark upon a journey of history and heart.

Discover the charm of Virginia’s capital city through this comic novel. Not since Midnight in the Garden of Good and Evil has a book promoted a modern Southern city with such exuberance. Penn Miller paints a picture of Richmond as a premier historic destination on the rise. The main character in this novel is the city itself, struggling with its past. As the capital of the Confederacy, Richmond was at the center of America’s defining event, and the characters populating this story endeavor to come to peace with it.
Penn Miller grew up in Virginia’s coal-mining region in the southern Appalachian Mountains. For the past thirty-five years, he has worked in downtown Richmond, discovering the city’s historic haunts and hidden treasures.

April Michelle Davis spent the better part of two years working with the author to prepare this manuscript for publication.

As Thin as You Think: Discover the Keys to Unlocking Your Weight Loss Power will unlock the door to permanent and pain-free weight loss, a lifelong healthy relationship with food and with yourself, understanding the power of your subconscious mind to create lasting change, removing faulty beliefs that are holding you back, easy tools, techniques and strategies that assure your success, and peace of mind — you will never have to feel powerless over any food or beverage again.

April Michelle Davis proofread this manuscript the week before it was sent to the publisher. She ensured consistency in style and correct grammar and punctuation, enabling the reader to easily consume the material.

Ten years after the successful first edition was published, so much had changed in distribution branch management. This second edition is completely revised with vital new information that today’s branch manager needs to read to succeed in today’s very challenging economy!

One of the biggest trends related to branch business is the even higher expectation for branch manager performance today. The traditional advancement of a person going from inside sales to outside sales to branch manager is no longer the assumed track. The branch manager who comes up that track with no business and leadership skills has really struggled as companies push even harder for improved performance at the branch level. Regardless of organizational structure, the branch manager — the CEO at the market level — must possess the 5 Fundamentals in this book if the company is to remain profitable and provide the best value for customers in today’s new market landscape. 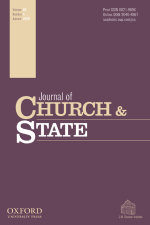 The Journal of Church and State is concerned with what has been called the “greatest subject in the history of the West.” It seeks to stimulate interest, dialogue, research, and publication in the broad area of religion and state. JCS publishes constitutional, historical, philosophical, theological, and sociological studies on religion and the body politic in various countries and cultures of the world, including the United States. Each issue features, in addition to a timely editorial, five or more major articles, and thirty-five to forty reviews of significant books related to church and state. Periodically, important ecclesiastical documents and government texts of legislation or court decisions are also published. Regular features include “Notes on Church State Affairs,” which reports current developments throughout the world, and a list of “Recent Doctoral Dissertations in Church and State.”

April Michelle Davis copyedited an issue of this journal while the regular editor was on leave. April Michelle has been a professional copyeditor since 2001, continually refreshing her knowledge of grammar via professional development courses, books, and seminars. She will tell you what keeps her up at night are the errors that she thinks about, and she can’t sleep until she jots them down in her notebook, which lives on the nightstand.

A Caring Community, a compelling story of The Retreat, told by Damian McElrath and John Curtiss, should give us all hope that recovery from alcohol and drug dependency can be affordable, accessible, and effective for all who need it. This time-tested caring community approach to recovery has become a standard of care that has helped thousands of individuals and their families access a life of recovery.

This book provides a historical perspective of the Minnesota Model of treatment, the impact of managed care on the treatment field, and chronicles the step-by-step process this group of dedicated addiction professionals and recovered individuals undertook to change the way people access a life of meaningful and productive recovery.

April Michelle Davis worked directly with one of the authors to copyedit this manuscript while preparing it for publication. During the copyediting phase, April Michelle reviewed the manuscript at the clause level, checking thematic organization at paragraph and sentence levels and checking for consistencies, errors, and omissions. April Michelle‘s attention to detail proved beneficial to the outcome of this manuscript.

April Michelle Davis and her book, A Princess in Disguise, were featured on June 14, 2017, on Diane Burton’s blog Meet the Author Thursday.

“How long does it take you to write A Princess in Disguise?

“I began thinking about this storyline before there was even a story to write. I grew up with both my parents. After school, I enjoyed watching the Disney cartoons. As I watched Aladdin, I soon realized that the mother of Jasmine was not included in the movie nor in the cartoons, and I began to wonder why or where she was. This realization had me search storylines for the whereabouts of mothers. The mere mention of a character’s mother got my attention. Yet, I eventually set aside these ideas.

“When I was in high school, I thought that my ideas could be turned into an interesting story so I began expanding on them. I wrote from my heart until I could write no more, yet the book was not finished. I let my peers read my manuscript hoping that their aspirations for me would drive me forward, yet I set my manuscript aside.

“As a grown woman, I joined a book club where I meant another writer, a writer who inspired me to finish my book by the energy that she expressed through writing and the bond of our same love of writing. I finally finished my book and then the editing began. We edited the book and even had agents request and review the manuscript. Again, I set it aside.

“Then in 2012, my writing partner was murdered, and I could not bear to look at my princess manuscript. In 2014, I met a man who could help me publish my manuscript and who pushed me to do it in honor of my writing partner, and I began editing the book again. Iguana Press initiated a crowdfund to see if there was interest in the story and gain initial funds for the book’s production. Midway through the crowdfunding, the campaign suddenly came to a halt as the sale of the crowdfund site fell through and all campaigns were suddenly ended. Though the remaining days of my campaign was held at another site, the momentum that had been building had ceased.

“Upon completion of the campaign, the formal editing process began—with myself in the writer’s seat. With my mother as my assistant in helping to review the manuscript, we pushed the book publishing company’s editors to their limits because I would not settle for less.

“My book A Princess in Disguise is about a princess on a quest. On the night of her sixteenth birthday and before her father has the chance to force her to marry a complete stranger, Princess Margaret sneaks away from the riches and safety of the palace. Torn between her fate and freedom, Princess Margaret desperately goes looking for her mother as the answer. In a quest of soul searching and physical hardships, the twist of events may take the readers by surprise, instilling a piece of the story in their hearts.

“Today, I acknowledge SaraJane in my book as the lady who inspired me, my dear book club friend. A Princess in Disguise is available on Amazon, at Barnes & Noble, and through other book outlets. Or a signed copy can be ordered directly from me at aprilmichelledavis.com.”

April Michelle Davis and the main male character Huntley in her young adult book A Princess in Disguise were the headliners at the Short Pump Town Center Crazy 8 on July 29, 2017. The more April Michelle introduces her young audience to her book, the more she sees that the interest of her potential male readers has been increasing. April Michelle is pleased that her book is reaching both girls and boys through the adventures that Huntley and Princess Margaret experience together and the special message the April Michelle has written within the pages of A Princess in Disguise for all young adults to embrace and live by as the golden rule is realized in today’s culture.

Inside the Sell Real Estate